May 26th marked the first night of protests that were ablaze after George Floyd's death at the hands of the Minneapolis Police Department. The day before, four Minneapolis police officers arrested George Floyd for allegedly using a counterfeit $20 bill to buy cigarettes. Before verifying if the accusation was true or not (it turned out not to be), the police officers pulled out their guns and forcefully removed Floyd from his car. Even though he did not resist arrest, he was put to the ground face down, where Derek Chauvin kneeled on his neck. George Floyd repeatedly said that he could not breathe, but despite his pleading, Chauvin kept his knee on George Floyd's neck for 8 minutes and 46 seconds until Floyd was dead. Chauvin and his counterparts in the arrest had been involved in multiple prior instances of police brutality, yet they were still allowed to roam the streets and commit more acts of police violence.

In response, countless acts of solidarity ignited around the world, from Berlin to Toronto to Atlanta. Protesters have been coming together in every city with water, masks, snacks, baking soda, milk, first aid kits, spray paint, and megaphones. But with every act of solidarity, the police became increasingly aggressive. The solution seems to lie in a more radical approach of fully defunding  and ultimately demilitarizing the police.

Most protests and events organized by groups seeking justice last only a few hours, dispersed over a couple of weeks, but the movement seeking justice for George Floyd has persisted for more than a week, only pausing for a few hours each morning for protestors to rest. Perhaps this is because the movement represents much more than justice for Floyd alone. It was only recently that Ahmaud Arbery was fatally shot for jogging and Breonna Taylor was fatally shot by the police while asleep in her house. These killings of Black Americans have become routine. It is empirically proven that police officers kill thousands of people annually. The rate at which Black Americans are killed by police brutality is at least twice as high as the rate for Whites.

Though the protests are in the name of George Floyd, supporters seek justice for the thousands dying at the hands of the police every year. George Floyd's death, one of the most high-profile cases in the past few years, was just the tipping point. The already exhaustive list of victims only lengthens as protesters are killed by both police and white supremacist groups, regardless of how they choose to protest. David McAtee was shot and killed while protesting for his right to live. Similarly, the police have started inciting violence at protests against their violence, in spite of their knowledge that they were being filmed.

Iyana Trotman, a Newark protester, writes that the movements are not just about George Floyd, but also for the many Black Americans who don't have access to clean water, live in food deserts, have incarcerated parents, and have poor education systems. These protests address centuries old systemic and institutionalized racism, and the drive powering them seems unending.

The Black Lives Matter movement introduces a struggle paralleled by a multitude of other groups around the globe. Despite the risks, there has been a consistently high turnout of undocumented immigrants and Latinx populations at protests in LA and other major cities. Police brutality and lack of accountability are major issues in ICE detention centers, where detainees are clustered together in cramped spaces, children routinely go missing, and officers are not held accountable for their abuse of detainees.

From mass incarceration to racial profiling, the movement has brought together different communities in some of the largest urban hubs in the U.S. Palestinian liberation movements have also demonstrated support. The Israeli Defense Forces shot and killed Zaid Fadl Qaisia, the same way Cleveland police shot and killed Tamir Rice. The Israeli police shot and killed Iyad el-Hallak, an autistic man, the same way the Madill police killed Johnny Leija, whom the police knew was sick. The LGBTQ community, which would normally be celebrating pride month, has come to show support at protests. They owe their successes to trans women of color who headed the movement for queer liberation, including Marsha P. Johnson, Sylvia Rivera, and Zazu Nova. They recognize the importance of the Stonewall Riots in their liberation and have therefore shown up in mass numbers to support Black Lives Matter.

A large coalition of anti-capitalists have also come to protest. Attributing many issues of the Black community to structural elements of capital, many anti-capitalist groups have come to show solidarity. Walking through the streets, they emphasize how Houston's downtown sharply contrasts Houston's 3rd ward, where George Floyd grew up. They protest in front of J.P. Morgan Chase banks, which refused to give mortgage loans to Black clients. Thousands have come out to march with the families of victims, Houston has walked with George Floyd's family, every step of the way.

Celebrities have postponed important releases of movies, technology, games, etc. to display support. In L.A., celebrities like Kehlani and Halsey have been treating injuries and urging their fans with resources to donate or even serve as medical help at sites where protesters are injured from rubber bullets and beatings. Tens of thousands have stepped up to "match" donations to bailout funds and supply funds like the Minnesota Freedom Fund, even creating a social media trend out of donations, a nice change from the typical performative activism. Allies of the movement have come to the protests with water, masks, and food to keep people from getting dehydrated or sick.

One of the ugliest things these protests have revealed is how quickly police will incite violence against the people. Police departments across the nation have begun using rubber bullets as a supposedly nonlethal way to disperse crowds. These bullets are palm-sized metal bullets with a thin rubber coating that can penetrate skin and are not meant for close range shooting.

Officers in some states have been authorized to use lethal force on protesters. Trump has called for the National Guard to be used to suppress the protests. He has received harsh criticism for his response, especially for calling protesters "Thugs," but other popular political candidates have taken similar approaches. Joe Biden knelt with protesters in remembrance of George Floyd, but shortly after, he proposed that police forces shoot protestors in the leg to decrease cop-caused fatalities.

The police have been consistently arresting people for small charges such as obstructing traffic, even when obeying all traffic rules. In many cities, an empty plastic water bottle from a crowd of 20,000 people thrown vaguely in the direction of the hundreds of police officers was enough for them to deploy round after round of tear gas. NYPD and LAPD have been running over protesters and tazing, shooting, and macing them.

There is evidence of all three being done to civilians who weren't even protesting, but simply going out to buy something. Yet media coverage about the protests focuses on two things: the looting and the vandalism. Much of the coverage claims that protesters have done the most damage to the cities, but this turns out to be untrue. For example,, the NYPD told the New York Times that protesters had stolen $2.4 million worth of watches from the Soho Rolex store, but a store official claimed that not a single watch was stolen, and none were even on display. Videos have shown police officers destroying their own cars and spray painting or shattering businesses' windows.

Of the local and Black owned businesses that were damaged, most have been able to recover from millions of dollars in fundraising, and they have even had more business from people buying from Black-owned stores to support the movement. Stores in Minneapolis, like Gandhi Maha, have been burned down, but their owners still support the movement. One business owner made a heart-warming statement: "Let my building burn. Justice needs to be served. Put those officers in jail." Even multiple multi-million-dollar corporations have shown their support. The CEO of Target published a letter saying that Target can restock its damaged store and that all employees will receive their full wages until they can reopen.

But even if this wasn't possible and that branch of Target was permanently shut down, there would still be no comparison between the countless deaths of innocent people at the hands of the state and property damage. That comparison is simply dehumanizing. It may be that these acts of open destruction are exactly what's needed at a time like this. Most liberation movements begin with riots (such as Stonewall). When voter suppression in certain red-lined areas is such a prevalent issue in a supposed democracy, a group of people cannot be blamed for turning towards insurrection. After decades of police brutality covered up by race-neutral excuses, however weak, it is expected and justified for there to be some sort of resistance. These protests have been deemed violent, but the violence has in too many of these cases been initiated by the police.

In a protest against police brutality, the state has sanctioned police brutality as an effective tool for suppressing forms of resistance. These beforementioned facts highlight a much broader problem with the American policing paradigm, which may only be solved by reassessing the role of role of police in a democratic society.

Original article can be found here.

Roohie Sheikh is a high school intern in the Center for Justice Research at Texas Southern University.  Her research focuses on the legal parameters of qualified immunity.

Howard Henderson, PhD, is the director of the Center for Justice Research and Professor of Justice Administration in the Barbara Jordan – Mickey Leland School of Public Affairs.

@CraigJRich1962 Congratulations to the #CSEM team!!

CREA 2020: Join us October 1 for a full-day workshop on “Utilization of a Culturally Responsive and Racial Equity Lens to Help Guide Strategic Engagement and Evaluation I & II!”

CREA has been created as a vehicle for us to engage in rigorous evaluation, assessment, research, practice, and meaningful dialogue relative to our sc...

Join us on today at 11:00 AM CT for a discussion on the best approaches to addressing COVID-19 & race in the criminal legal system. Join the conversation by registering here: https://zoom.us/webinar/register/WN_dLnmDo8OS0eve-4o3GDWgg
@TexasSouthern @tmcf_hbcu @AdvancingOpps @BPDA_justice @Ktsu2N @officialKTSU909 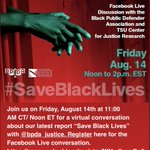 Join us on tomorrow, August 14th at 11:00 AM CT for a virtual conversation about our latest report “Save Black Lives” with @BPDA_justice. Join the conversation by registering here: https://zoom.us/webinar/register/WN_dLnmDo8OS0eve-4o3GDWgg
@TexasSouthern @bjmlspa @tmcf_hbcu @AdvancingOpps 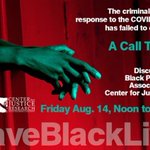 Join us on Friday, August 14th at 11:00 AM CT/ Noon ET for a virtual conversation about our latest report “Save Black Lives” with @BPDA_justice. Register here for the Facebook Live conversation.
https://zoom.us/webinar/register/WN_dLnmDo8OS0eve-4o3GDWgg @TexasSouthern @bjmlspa @tmcf_hbcu @AdvancingOpps 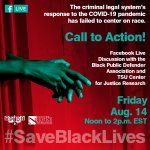